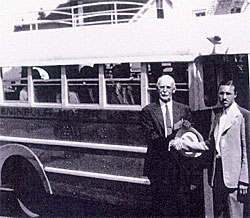 THE CITY OF COCOA LOOKS TO ITS FUTURE but basks in its past.

Located on the Atlantic Ocean in central Florida, Cocoa’s neighbors include the Kennedy Space Center, the launching pad for America’s space shuttles and the starting point for hundreds of scientific and commercial missions to the edge of the final frontier.

Though its residents and visitors are reminded often of the present and future by the sound of rockets soaring into the sky, the town of Cocoa also appreciates its past. The first families, many of them dependent on fishing to survive and thrive, began arriving in the area around 1860. A post office was established at Magnolia Point, around two miles to the north, in the early 1880s. Shortly thereafter, the town, situated on land owned by Capt. R.A. Hardee, was given the name Indian River City.

The people who lived in the coastal town might have liked the name, but apparently U.S. postal authorities did not. It was, reportedly, too long for a postmark.

Several stories have circulated throughout the years concerning how the town got its current name. In 1925, a local newspaper published at least three accounts, all supplied by its readers.

One theory claims a group of local residents at a town meeting in 1884 wanted to name the city after a local product or feature of the area. At the urging of Capt. R.C. May, they finally settled on the cocoa plant. Another reader credited a woman who received her inspiration from a box of baker’s cocoa, while a third cited a woman who lived along the banks of the Indian River and supplied passing sailors with hot cocoa.

“...Cocoa survived a disastrous fire and a brutal winter freeze.....”

Regardless of how it got its name, Cocoa survived a disastrous fire and a brutal winter freeze to earn its place on Florida’s Space Coast. Its restored downtown area, Historic Cocoa Village, provides its nearly 17,000 residents and never-ending stream of visitors with a glimpse of what life was like in central Florida long before the United States launched its space program.

The city’s water entrance is through Destin Harbor, a lagoon that lies between the beaches and the main peninsula. The lagoon is formed by a sand spit named Holiday Isle, where many condominiums line the harbor. The city is connected to Niceville, Florida, by the Mid-Bay Bridge. The larger municipalities of Panama City and Pensacola are located to the east and west, respectively.

The area is named for Capt. Leonard Destin, a fisherman who settled there between 1845 and 1850. The captain and his descendants remained for decades and were instrumental in launching the area’s fishing industry.

Destin was incorporated as a municipality in 1984 and has experienced rapid growth since. The city features a grand assortment of hotels and motels as well as condominiums. Private homes are available for rent for anyone who wants to see and feel the unique sand, play nearby golf courses or cast a line into Destin’s fertile waters.